Relevance to our business

The Fuji Oil Group has key operating sites in 14 countries (as of July 2022). While food culture varies from region to region, our activities as a food ingredient manufacturer, including plant operations and product sales, requires cultivating close relationships with local people. Our business success relies on a partnership with these communities. The work we do in community development also enables employees to find greater satisfaction in their work and raises their awareness of sustainability.

Each company in the Fuji Oil Group carries out community development activities specific to the country and region in which they operate. Group-wide and interregional activities were overseen by the Chief “ESG” Officer (C“ESG”O) in FY2021. Since FY2022, that role has been transferred to the ESG Representative, with initiatives led by the Sustainability Development Group, ESG Division, Fuji Oil Holdings Inc.

Since FY2014, Fuji Oil Co., Ltd. has been conducting a food education project in Japan in cooperation with the nonprofit Houkago NPO AFTER-SCHOOL. The objective is to get children to become curious about human and planetary health by teaching them about global food issues and the importance of food.
In FY2021, we held two programs on soybeans (“The Global Environment and Our Food” and “Food Education Bingo”) and one on palm oil. Given the continued spread of COVID-19, we offered all programs either in-person or online, depending on exposure risks and the preferences of each school.
In FY2021, we taught a combined 37 classes, in-person and online, on the power of soy and palm oil to 1,188 students at 21 elementary schools. A total of 4,292 children have participated in the food education project since it began.
In addition to elementary school students, in FY2021 we also held food education events for junior and senior high school students, college students, customers, and consumers. More than 450 people across 10 locations explored the topic of global sustainability through familiar foods, using ingredients used by the Fuji Oil Group as subject matter. We plan to continue offering programs like these, focusing on speed and timeliness in contributing to society through food and to accelerate action on the SDGs as well. 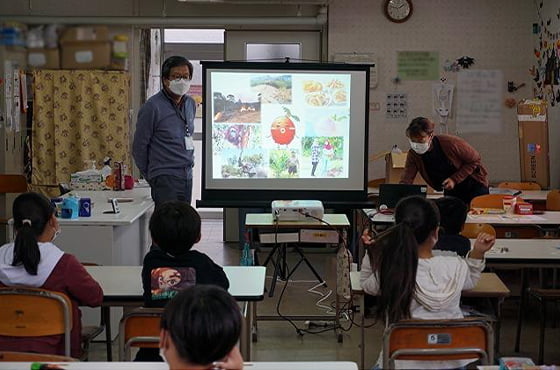 Support for SDGs for School

SDGs for School* is a program run by non-profit Think the Earth to spread knowledge of the SDGs among junior and senior high school students and encourage learning and action for creating a more sustainable society. In 2021, the program was officially designated by the Japan Ministry of the Environment as an initiative that supports environmental education through conservation and partnership efforts. The Fuji Oil Group has sponsored this program since 2018. Continuing the project started in FY2020, in FY2021 the Fuji Oil Group donated chocolate (two types: with cocoa butter and with vegetable oil) to three high schools in Japan to use as aids for teaching about environmental problems through familiar foods. A combined 350 students learned about climate change and the importance of forest conservation.

Since March 2018, Fuji Oil Co., Ltd. employees have volunteered their time and labor to support park development at Izumisano Kyuryo Ryokuchi in Osaka Prefecture, Japan. Local volunteers, the Osaka prefectural government, and companies come together once a month to manage the forest and bamboo groves in a designated area of the park.
In FY2021, the volunteering events were held only three times (43 participants in total), due to the many months when the COVID-19 state of emergency was in effect. Still, the volunteers continued to thin the bamboo groves, which has produced the following outcomes:

Employees plan to continue volunteering in FY2022, with the goal of creating habitat for owls, giant flying squirrels, and other wildlife. 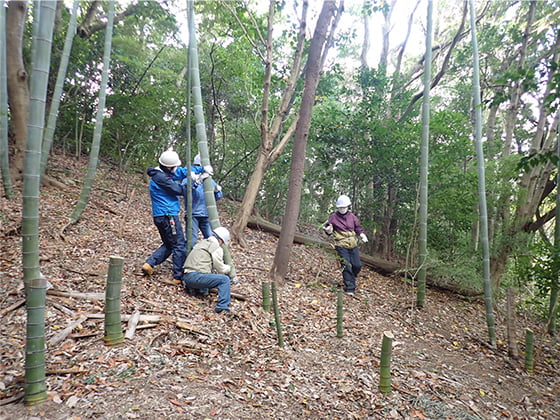 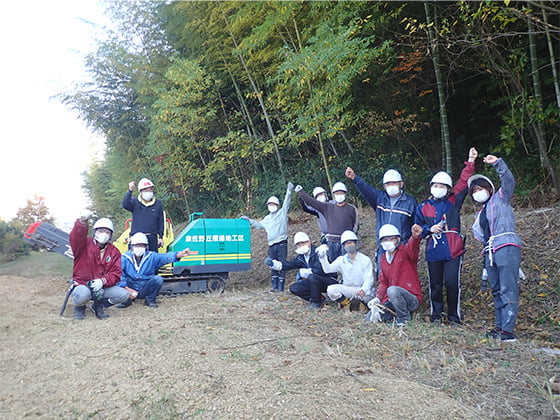 The Fuji Oil Group has been funding academic research on soy protein since 1979. The Fuji Foundation for Protein Research, restructured as a public interest foundation in 2012, continues and builds upon this legacy while communicating it broadly to the Japanese public. To date, the Foundation has awarded approximately 1.2 billion yen to more than 1,200 studies covering subjects from the life sciences to dietary culture, and to the science of cooking including food-tech.
In addition to funding research, the Foundation also holds free open lectures, an important part of its public interest mandate. In FY2021, we hosted a series of lectures in Kyoto, with precautions taken to prevent the spread of COVID-19 for in-person attendees (around 100 people participated in-person and another 100 watched via livestream). In addition to talks by leading researchers, the program also included a panel discussion joined by renowned Kyoto chefs who also hold a PhD.
In the lectures, Prof. Naoto Minami of Ritsumeikan University spoke on the tensions between legumes and animal meat as sources of protein in dietary culture. He discussed how legumes, once regarded as “poor people’s food” in the West, are being reinterpreted as “wise people’s food” that contributes to more sustainable modern diets, and that this change is due to the spread of Asian culinary traditions, which relied more on legumes than animals for protein. Prof. Hirofumi Tachibana of Kyushu University presented the latest research findings on the protective effects of soy isoflavones on bones. In the panel discussion, moderated by Prof. Hanae Yamazaki of Ryukoku University, the lecturers talked about how Japanese cuisine, being short on animal-based ingredients, uses age-old wisdom, technique, time, and labor to draw out the best flavors from plant-based ingredients. They suggested that this in itself contributes to the SDGs. 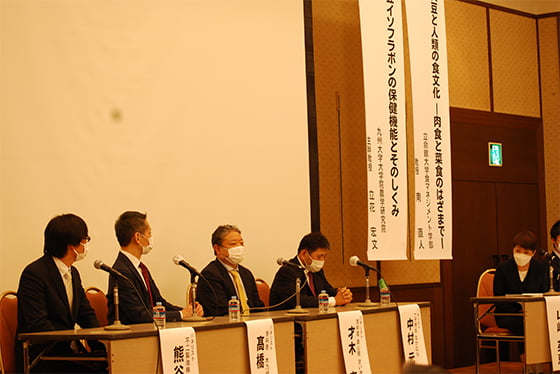 Brazil, home of Fuji Oil Group company Harald, is seeing economic hardship reach new extremes, with the average income at its lowest level in a decade, 12.8% of the population below the extreme poverty line, and more than 12 million people unemployed.
To address these conditions, Harald offers a chocolate business startup program to low-income earners since 2019, in partnership with a local NGO and municipalities. Some 925 people have taken part in the program so far.
In an expert online course (also held in community kitchens in Sao Paulo when COVID-19 cases are low), participants receive free online tools, ingredients, and other resources donated by Harald, and leave with high-quality, practical knowledge and skills for developing their own recipes and for selling their products. The program is popular among young adults and women (making up 80% of the participants) due to the low startup costs and quick returns of running a chocolate candy business.
In addition to the startup program, Harald also held more than 2,700 free workshops in 2021 on how to manufacture chocolate and candies for consumers. More than 40 experts explained basic recipes for selling chocolate, providing the roughly 50,000 participants from across Brazil with valuable guidance for growing their business. 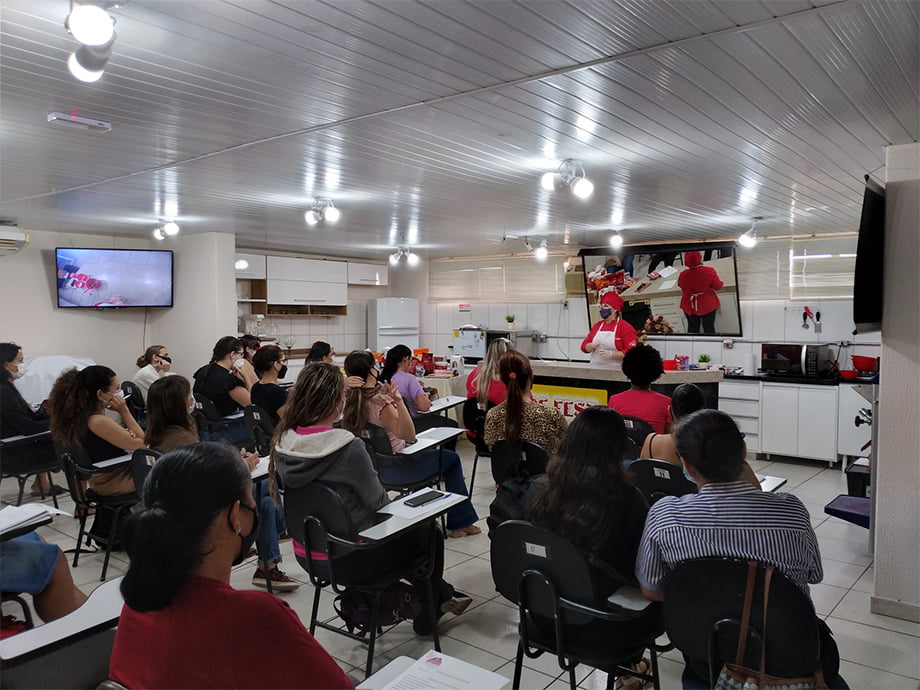 Food donations that bring hope to the most vulnerable people

In November 2021, Harald organized “Transform Christmas with Harald” in partnership with the NGO Central Única das Favelas (CUFA), which aids poor communities. For a limited time, Harald allocated a portion of revenues from its products to purchase food baskets, providing a delicious Christmas meal to more than 12,000 socially vulnerable people. The campaign was supported by thousands of consumers.
The company also donated food throughout the year to the following organizations and communities in need. 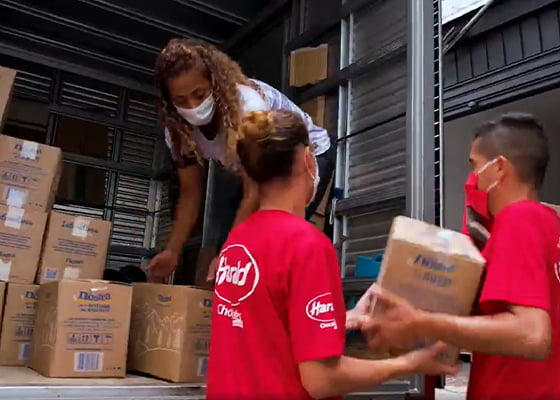 Food baskets donated in the project